The Arctic ecosystem is an important yet fragile ecosystem, it is very sensitive to global climate change. Arctic region has been warming rapidly at a rate much higher than the global average (Serreze et al., 2011). Arctic greening, a phenomenon of increasing in vegetation cover and productivity was observed and confirmed with the remote sensing data between 1984 and 2012(Ju & Masek, 2016) and was proved to be driven by warming (Elemwndorf et al., 2012). However, the greening trend reversed in recent years, with severe die-back of the dominant shrubs across the Arctic region, known as Arctic browning.

Recent studies showed links between extreme climate events and Arctic browning (Bjerke et al., 2017; Bokhorst et al., 2009; Vikhamar-Schuler et al., 2016). Winter warming and frost drought are two of the most damaging and frequently observed climatic extreme events (Bjerke et al., 2014) and is proved to be one of the drivers of Arctic browning. Winter warming with relatively high temperatures deceive the plants, causing them to start premature dehardening in advance, but when the weather switching back to normal temperatures, plants may be damaged by the freezing cold temperature. Frost drought happens when plants lose the protective snow layer in winter, the low temperature freezes the soil and plant’s water uptake is limited so that transpiration of exposed vegetation can result in desiccation injury (Sakai & Larcher, 1987; Tranquillini, 1982). Frost drought can become worse when following the extreme winter warming. The melting of snow caused by the extreme winter warming makes vegetation and soil surface directly exposed to the cold air.

While recent research on Arctic browning has focused on the very visible damage impacts seen above ground on plants, almost nothing is known of the impacts below ground on soil carbon storage. Initial work suggests the soil respiration significantly decreased in response to the impacts of extreme climate events. Full assessments of CO$_2$ fluxes following Arctic browning driven by extreme winter warming events have been done both in summer (Parmentier et al., 2018) and winter (Treharne et al., 2018). Both of them reported significant decreases of Gross Primary Production (GPP) by 12% and 37% respectively and increases of ecosystem respiration and consequently break the ecosystem carbon balance by reducing carbon uptake. Although the ecosystem respirations and productivities were Measured and compared, the pathway of impacting soil respiration and therefore soil carbon storage are still unknown.

Litter decomposition as a major part of soil respiration (US DOE, 2018) may be used to explain the decrease. Extreme climate events in the Arctic region can also affect the litter decomposition process. Differences of tea-bags’ decomposition rate were observed in Treharne’s study with a clear trend of decrease (P=0.052) for damaged plots. In this experiment, tea-bags are not native plant litter in Arctic ecosystem and maybe not a simulation for native plant litter decomposition (i.e. containing additional flavouring, physically roasted and ground). Furthermore, plant litter quality change can also affect the decomposition rate and therefore soil carbon flux. Defensive substances (such as tannins and polyphenols) are usually produced when plants are under external stress (Gurevitch et al., 2002), and these defensive substances can slow down the decomposition of litter (Hättenschwiler et al., 2010). Currently, there is no research on the litter quality change under the Arctic browning caused by extreme climate events.

*This field is a whole new area, which makes me very exciting. Soil physical structure change after the browning (Soil water holding capacity, agglomerate characteristics are expected to change), nutrient feedback in the die-backed region (nutrient pool of soil may help the self-recovery), all these questions have no answer yet. But in this research proposal, I would prefer one topic at a time. 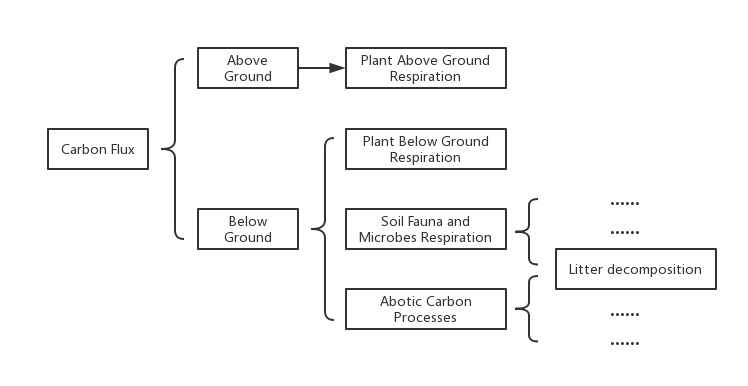 To figure out the consequences of Arctic browning after extreme warm winter in the Arctic region on carbon storage aspect. Specific objectives are to,
1. Quantify the differences of litter quality before and after the Arctic browning,
2. Determinate the effects of litter quality change on litter decomposition rate (Quality effect),
3. Determinate the effects of warm winter on litter decomposition rate (Environment effect),
4. Predict the change of carbon flux after the Arctic browning. 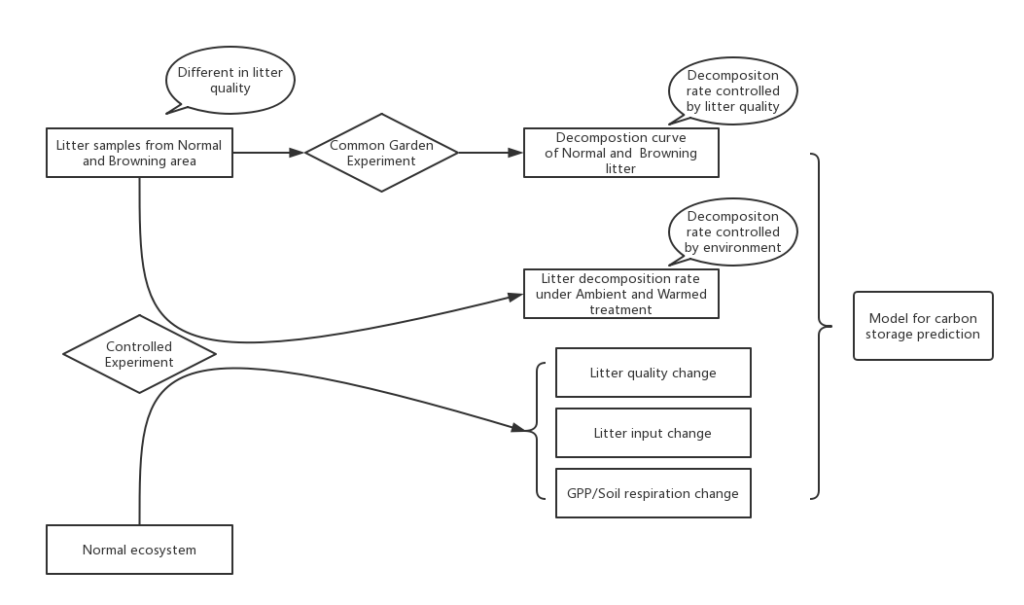 In order to compare the quality differences between shrub litter before and after browning, litter samples of shrub in both normal and brown condition will be collected within the Arctic region before winter in 2019 October. There will be 3 sampling transects with different altitude (or latitude), and 3 repetitions of both normal and brown shrub litter samples in each transects. For test budget reason, litter samples can mix up within repetitions. Litter chemical and physical qualities will be measured and compared between normal and brown shrub. If the differences exist (very likely), both common garden experiment and controlled experiment for comparison of litter decomposability will be performed.

The common garden experiment will take place in specific areas in northern Norway, where typically experiences a mild winter climate with high levels of snowfall compared to other sub‐Arctic regions (Treharne et al., 2018). The site will have a natural cover of healthy shrub and haven’t suffered from extreme climate event in recent years. Litter bags (mesh size 0.25 mm) along with 2 g shrub litter samples from 3.1 in each will be buried in soil at 8 cm deep with 4 repetitions in 2019 December, that is 72 litter bags in total. For every 3 months, dig out one set of 18 litter bags, washed, oven-dried and weighed, the litter decomposition curves and litter decomposition rates can be calculated after 1 year.

Site selection for the controlled experiment will be the same with 3.2. A system for simulation of winter warming will be constructed with both canopy (lamp) and soil (heat cable) warming(Bokhorst et al., 2009). There will be 12 plots in total with 4 ambient (A) plots, 4 canopy warming (C) plots, and 4 canopies & soil warming (CS) plots. In addition to the natural cover of shrub, a set of 6 litter bags (normal and brown shrub litter in 3 different transects, mixed within repetition) with litter samples will be buried in each plot, that is a total of 72 litter bags. During the mid-winter of 2020, lamps of C and CS, heat cables of CS will be turned on till the snow cover melt, and the heat cables will remain active for 3 days after the lamps turned off. In the summer after winter warming simulation, soil and ecosystem respiration will be measured with LiCor-6400, above and below ground biomass will be measured after that. Litter bags will be dug out, washed, oven-dried and weighed. 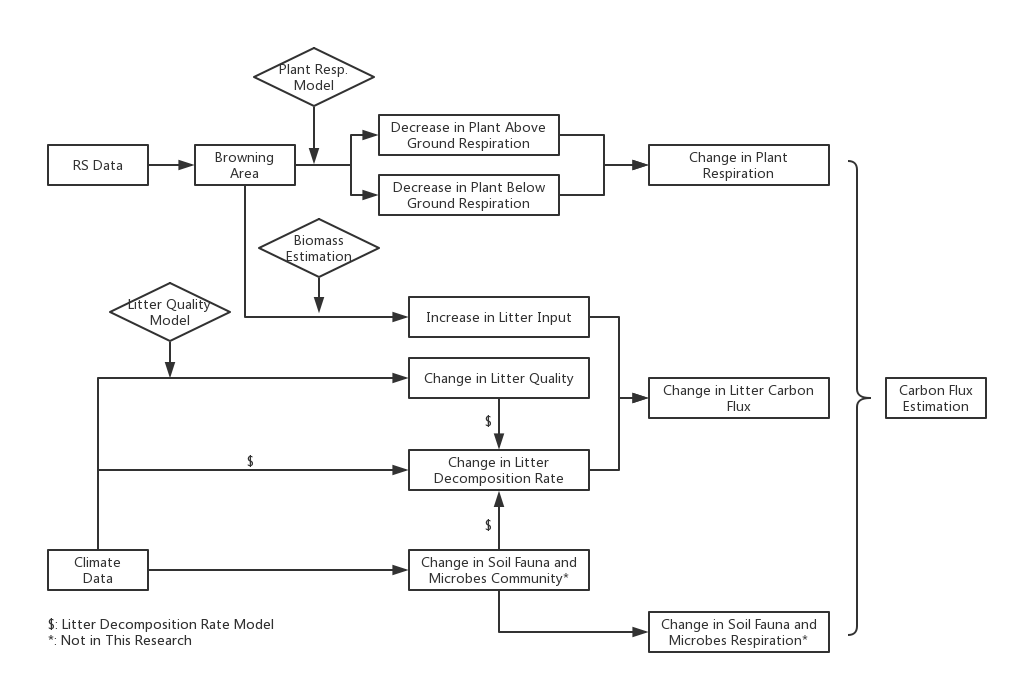 Figure 3. How to Predict the Carbon Flux Change under the Extreme Climate Events (Arctic Browning).

US DOE (2008). Climate Placemat: Energy-Climate Nexus, US Department of Energy Office of Science.

This article is under CC BY-NC-SA 4.0 license.
Please quote the original link：https://www.liujason.com/article/202.html
Like (0)